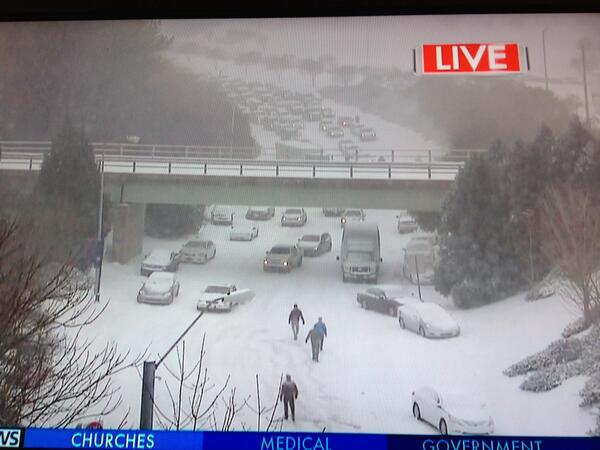 Selco at shtfschool.com discusses this thing. The guy you were talking to had blown a mental fuse. Not a good thing when times get tough and a bit of ice and snow on the roads isn’t what I would call tough. Inconvenient, yes, tough? Wait until it snows enough that it takes hours to dig out of your parking spot. My wife moved a ton of snow when I was traveling and she’s 60. We’re soft. Creep down the road, don’t try doing the speed limit and plan way ahead for stops so you don’t need to slam on the (non working) brakes. For a change be a little polite (a totally alien concept to many NC drivers). Driving like a BOOH only either has you wrecking your car or someone else’s car. Tail gating is a big no-no too (see above reference to being a bit more polite).

Would say stay home where it is warm and dry. Eat the food you have on hand (menus might be a little strange, but food is food). Relax. Avoid getting drunk or stoned. You might have to use the mush that resides in your head. When walking go slow and avoid hills. Walk flat footed so your whole foot comes straight down (avoids slipping). Stay dry. Get wet (regardless of the source sweat makes you wet too) and you chill much, much faster. Exercise outdoors and you might consider just wearing gloves and a hat while carrying your coat. Keeps you from getting your coat sweat soaked.

Don’t bring the BBQ grill into the house for heating. You will kill everyone in the house with carbon monoxide poisoning. Don’t crank up your generator where the exhaust drifts into the house. It will kill everyone in the house. Carbon monoxide poisoning is a silent killer. Everyone has a splitting headache and the canary died? Get everyone out into the fresh air. You will have a headache that lasts for nearly a day, but you will be alive.

I am familiar with Selco’s stories. I do not see the morality in people necessary to survive stressful conditions in the future. Especially after yesterday. I heard a story about law enforcement second hand concerning the conditions in Raleigh this morning that reinforced the concept that power corrupts absolutely.

Absolute power corrupts absolutely. True. If/when things get really, really bad keep your head down and be aware of the situation going on around you. Cops don’t know it all even though they may think they do.

my husband and his carpooling buddy were following a snow plow that turned off 401 onto Old Stage, because 401 was shut down (unbeknownst to them). When the plow stopped on Old Stage and the driver was talking to LEO, hubby and buddy got out to ask what was happening. This was about 3:30 am -- no one else was on the road -- no big deal to ask LEO where they were directing them…right? WRONG! LEO screamed at hubby and friend -“Get back in your car NOW! Follow the snow plow! Get back in your car!” Could have easily said,” Sir, 401 is closed. You are being re-directed to 1010 via Old Stage”. No harm, no foul. But no, he had to act like a jackwagon!