Another Example of Our Two-Tiered Legal System 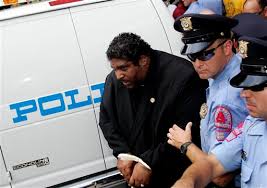 Over 900 people were arrested at “Immoral Monday” rallies and the taxpayers of Wake County have a large bill to pay for extra security at the General Assembly. Justice is 25 hours of community service for community organizers plus $180.

If there is no accountability for our actions, the rule of law is gone. How about jail time, probation and full restitution of all legal and security fees?

The Wake County District Attorney’s office is hoping to avoid trying all 924 people that have been arrested at this year’s Moral Monday protests.

Wake DA Colon Willoughby is making arrestees an offer: Perform 25 hours community service and pay $180 in court costs, and the charges will be dismissed.

According to Willoughby, it’s called “deferred prosecution.” Arrestees don’t have to admit guilt if they fulfill the community service requirement and pay the court costs. After a set amount of time, usually six months, all charges are dismissed.