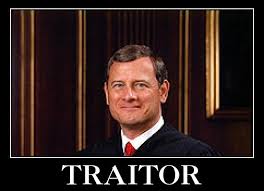 The lines are being drawn in our country. Whatever delineation you use to decide your particular line, I prefer the simplest: those who love Liberty vs. those who would enslave us. Most of those who are “transforming” the country to their agenda (slavery) are well known. However,   Mr. Roberts’ betrayal of the people, Constitution and Liberty is just as egregious as the act of betray by Benedict Arnold. No one expected Mr. Roberts’ betrayal concerning the Supreme Court decision on the Affordable Health Care Act. As outlined below, this tax will be $20,000 per family when fully enacted. What happens when people cannot pay this tax? What happens when people refuse to pay this tax?

What recourse but revolution is available to the people as the government enslaves us with excessive taxation and redistribution? Should restoration of the Constitution of the United States of America be considered revolution? I believe in this country and know in my heart that this government does not represent the morality, Sacred honor and the love of Liberty that I have. This government does not represent the future of a free America.

History shows what happens to vain and aspiring men in the highest offices when evil regimes fall. It is one thing to seek power in the open, but what do you call someone like Mr. Roberts other than this revolution’s Benedict Arnold?

IRS: Cheapest Obamacare Plan Will Be $20,000 Per Family

In a final regulation issued Wednesday, the Internal Revenue Service (IRS) assumed that under Obamacare the cheapest health insurance plan available in 2016 for a family will cost $20,000 for the year.

Under Obamacare, Americans will be required to buy health insurance or pay a penalty to the IRS.

The IRS’s assumption that the cheapest plan for a family will cost $20,000 per year is found in examples the IRS gives to help people understand how to calculate the penalty they will need to pay the government if they do not buy a mandated health plan.