This is the 9th straight week of crude inventory drawdowns… 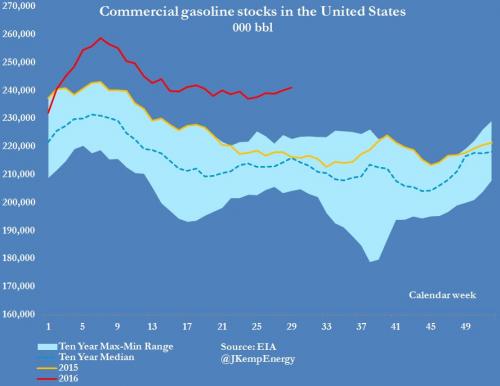 ~~~The following are my observations on the topic of petroleum inventory builds, refining without a customer, and the ultimate implications of a number of behaviors, taken in concert ~~~

As you can see in the chart above, US inventories of refined Gasoline have been held at record highs since the very beginning of the year.  And while this chart doesn’t provide data on diesel or aviation-fuel, we *know* that the ratio of gasoline, diesel, and other products obtained from every barrel of crude refined is essentially the same – therefore, production of diesel and aviation fuel have also been pushed to record levels since the very beginning of the year.

And strangely enough, even with this push to refine at record levels, crude oil inventories continue to rise, following a first-half surge in production, coupled with waning demand.

They are calling the shift in inventory this week a “draw-down” of crude inventories, but what’s really happening is that they’re taking crude oil out of reserves, spending the time, money, and resources to refine it, and then putting the refined products directly back into reserve inventory, because there is no customer to buy it.  This is exactly what they’ve been doing since January.

Does this make any sense to you?  To spend enormous amounts to refine the oil into petroleum products that are already overs-supplied, and suffering from flagging prices.  It only makes sense if you’re willing to throw the cost of refining “out the window” as an alternative to cutting back hours or handing out furloughs to your employees.  Or someone is paying them to refine all that crude oil.

So who is paying the refineries to process all this “reserve” crude into products?  Because whoever is paying the bill, apparently knows something the rest of us don’t.

Remember, gasoline and many other “lighter distillates” such as Aviation Fuel are perishable products.  So one of two things MUST be the case:  either 1) they can only run so far ahead of the demand curve with their refining operations, or they will essentially be destroying half their product; and/or 2) long-term considerations, such as the economic viability of products such as gasoline 6 to 12 months from now, have been minimized or even eliminated from their cost-profit equation…

Now all of the above is fact, and what it says about the probable state of our economy early next years isn’t good.

But What it suggests about the probable state of our government, early next year, is even more disturbing – because the lions share of those “reserves” are held in federal facilities as part of our ‘National Strategic Petroleum Reserve’.  So, if Fed.Gov is paying refiners to turn crude into diesel, gas, aviation fuel, &etc and put it directly back into the Strategic Reserve, then that is a huge Red Flag that our government is preparing to go to war.

Gasoline and typical grades of aviation fuel have a limited storage life once refined.  With proper pre-treatment, and storage under ideal conditions, these fuels can be stored for a year, perhaps even as much as a year and a half, best case, before their quality is reduced to the point where degradation renders them useless.  High grades of aviation fuel, such as what F-14s and F-16s require, have an even shorter storage life, before becoming too degraded to be useful in combat aircraft.

So, using this bit of data as a guide post, should we expect the US to be involved in a new war next spring?   And/or perhaps the full and vigorous rejuvenation of one of the wars we have supposedly just exited?    And/or a major domestic conflict  – – causing, or in conjunction with a disruption of the economy and supply chain – – in such a way that the government might require its Strategic Reserves for operations here at home?

Definitive answers are about as scarce as hen’s teeth, but the writing is on the wall:  In just one more way, we are seeing quite plainly that the Federal Government is preparing for something – something very big – and those of sound mind are obliged to consider what, exactly, that might entail.

Interesting thought pattern but if the idea that government actions always make sense well, that make no sense. So, while it may be a possibility, there is also the possibility this is simply more waste of taxpayer dollars attempting to prop up the house of economic cards.

As evidence take a look at Japan and their central bank that is not, not only buying up government bonds at negative interest but also buying corporate bonds and not stocks. I hear the BOJ is not discussing, with the encouragement of Uncle Ben Bernake, handing out cash to people to keep their economy contacting. It now appears Japan is the test lab with the rest of the reserve banks simply waiting their turn.

Such actions are nothing but TAXATION WITHOUT REPRESENATION.

We Are Preparing for War | NCRenegade

[…] giving folks a peek behind the presumptive veil at what may really be going on.  As I said in my previous article, very irregular builds in both crude and refined petroleum have been running at DOE strategic […]

Imports? I haven’t looked into it, but I’m wondering if imports of refined products are up? Thank you for putting this information up, much appreciated.