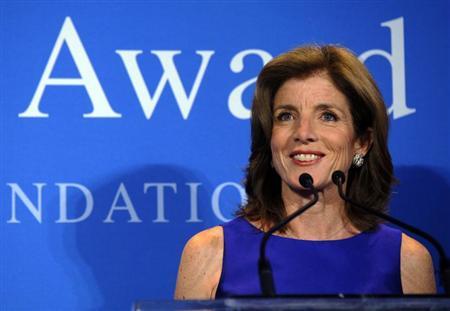 In May, 2012, the following information concerning Caroline Kennedy’s opinion of the Obamas was released from Edward Klein’s book “The Amateur”:

“Through these [spies that the Kennedy family has in the Obama administration] and other people, Caroline heard back that there was a lot of nasty shit being said about the Kennedys by the president and Michelle,” the family member continued. “There were catty remarks about how badly the Kennedy women dressed, and how their houses were shabby and threadbare. Caroline got the impression that most of this negativity was coming from Michelle, who didn’t want the Kennedys to be part of the administration for fear that they would have too much influence over the president.”

“Gradually, Caroline began to change her tune and side with Bobby and Kathleen [Kennedy Townsend] against the Obamas. Unlike Jackie, who was completely a-political, Caroline is a liberal with a capital L. When Obama didn’t raise taxes to balance the  budget, Caroline marked him down. In her eyes, he’s a mess because he doesn’t follow the liberal bible on politics. More important, Caroline discovered that the Obamas didn’t give a damn about her support. […]

“It really annoyed Caroline when comparisons were made by the media between Michelle and Jackie. Caroline had a word for such comparisons; she called them ‘odious.’ She really got annoyed. And when she began to fall out of love with the Obamas, love was replaced by outright scorn. Now she says things about Obama like, ‘I can’t stand to hear his voice any more. He’s a liar and worse.’”

What a difference a year makes as Obama is appointing her to be the next US ambassador to Japan. Maybe the president heard the latest predictions concerning another major earthquake hitting Japan.

Obama says will name Caroline Kennedy as ambassador to Japan

President Barack Obama said on Wednesday he would name Caroline Kennedy, daughter of the late President John F. Kennedy, as ambassador to Japan, lending the prestige of a storied political dynasty to the relationship with an important Asian ally.

Kennedy, who trained as a lawyer, is president of the John F. Kennedy Library Foundation and chairs an advisory committee at the Institute of Politics at Harvard University. Active in Democratic politics, the 55-year-old was an early and prominent supporter of Obama’s in his initial quest for the presidency in 2008.

Her appointment is subject to Senate confirmation.

Kennedy’s endorsement, along with that of her uncle, the late Senator Edward Kennedy, gave Obama the stamp of approval of one the most important names in Democratic politics and provided an enormous boost to his candidacy.

This entry was posted in Editorial and tagged Ambassador, Caroline Kennedy, Japan. Bookmark the permalink.