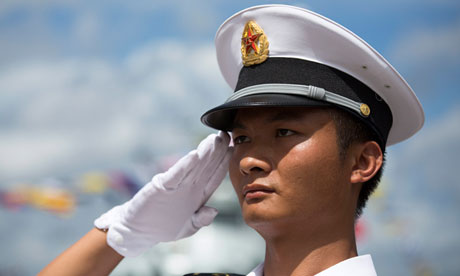 China will join Russia later this week for its largest-ever naval drills with a foreign partner, underscoring deepening ties between the former cold war rivals along with Beijing’s desire for closer links with regional militaries.

China has long been a key customer for Russian military hardware, but only in the last decade have their militaries begun taking part in joint exercises.

China’s defence ministry said on Tuesday that its navy would send four destroyers, two guided missile frigates and a support ship for the “Joint Sea 2013” exercises, which start on Friday in the Sea of Japan and run until 12 July. The ships departed on Monday from the port of Qingdao, where China’s Northern Fleet is based, and headed for the rallying point in Peter the Great Bay near Vladivostok.

“This marks our navy’s single biggest deployment of military force in a China-foreign joint exercise,” the ministry said.

General Fang Fenghui, the People’s Liberation Army chief of the general staff, announced the exercises during a visit to Moscow, where he met his Russian counterpart, Valery Gerasimov. The two also announced that another round of anti-terrorism joint drills would be held in Russia’s Ural Mountains region of Chelyabinsk from 27 July to 15 August.