Decapitation is the New Normal 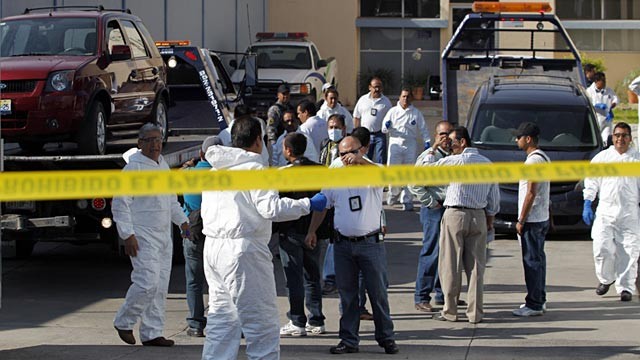 Police and forensic technicians are at a morgue offloading vehicles that contained the remains of 18 dismembered and beheaded bodies, in Guadalajara, Mexico, May 9, 2012.  (Ulises Ruiz Basurto/EPA)
Coming soon to a city near you – Drug Cartel Violence is on the rise, and quickly.  It has already spilled over the Mexican border into America several times.  Where are our border controls?
(ABC News)Police found 18 mutilated, headless bodies near a lake popular with tourists and American retirees just outside Guadalajara, Mexico, a massacre that authorities blamed on the Zetas drug cartel.A phone call alerted police to two vans on a dirt road near Lake Chapala early Wednesday morning. When police opened the van, they found 18 headless and dismembered bodies inside. Some were so badly mutilated that police have still not determined their gender. The bodies appear to have been refrigerated after death.Handwritten messages were found in the van. “They are clearly messages between rival groups that are in conflict,” said Tomas Coronado, prosecutor for the state of Jalisco. Officials said the notes were signed by the Zetas.

(KRGV-TV) 10Jan2012 – Police and other agencies are investigating three beheadings in two different states and they happened here in the United States, not Mexico.  Former DEA supervisor Phil Jordan says all three beheadings have cartel written all over them. They happened in Arizona and Oklahoma in the past year.

A murder mystery is now unraveling on a stretch of North Reservation Road in Tucson, Ariz. County workers found a headless man lying on the side of the road Jan. 6. The man’s hands and feet were reportedly missing, too.
“It would lead me to believe the message wanted to be sent. This is one of the ways they do it in Mexico, Colombia and other places,” says Jordan.

Jordan says the cartels are getting bolder in carrying out their beheadings across the border. He says we only used to see these crimes in Mexico.  “They don’t have any borders,” says Jordan.

More than 600 miles from the border, a 19-year-old human trafficking victim was found beheaded in Oklahoma. Carina Saunders was stuffed into a bag and left in a grocery store parking lot.  “People know if they get on the wrong side of the fence, they’ll be dealt with,” says Jordan.  The police chief in the area says two men running the trafficking ring killed Saunders to send a message to the other victims. Jordan says the cartels’ calling card is all over this case. Trafficking and smuggling are their top moneymakers. Revenge is the price of doing business.  “Definitely a cartel hit,” says Jordan.

And this is neither the first or the last such terrorist act we will see.  Al Qaida funded terrorist and drug cartels are in control of large swaths of Mexico these days, and they want to make sure everyone knows not to mess with them – even the police.  Two years ago, they executed a Mexican detective who was investigating piracy and murder committed against an American citizen on a lake along the US/Mexican border.
Source: http://www.csmonitor.com/USA/2010/1013/Falcon-Lake-pirate-murder-Is-beheading-message-to-the-Americans

Similar assassinations have been committed against Mexican military and government officials who have gotten too close to the truth regarding cartel and terrorist activity throughout Mexico.  As their power continues to grow, we should expect to see more “acts of control” such as these here in the US.  It is coming, and we may be too late to stop it, even if we implemented aggressive border security immediately.  While it is impossible to establish a definitive number, some sources estimate that more than 60,000 of these violent criminals/terrorists may have entered via Mexico in the past few years.

Certainly, any major disruption to civil society in the US would be an incredible opportunity for them to expand their various criminal operations and exert much greater control.