11 Signs of a False Flag 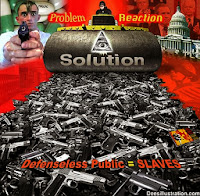 Throughout history, versions of the false flag attack have been used successfully by governments in order to direct the force of the people toward whatever end the ruling class may be seeking. At times, that end may be war, or it may be the curtailing of domestic civil liberties and basic human rights. In others, it is an economic agenda.

The following is a list of some of the most common elements of the false flag attack which should immediately be looked at in the event of some other incident that pulls at the heartstrings and emotions of the general public.

1. High Profile Event: The first question to ask would be “Is this a high profile incident?” The answer, of course, is fairly obvious. If an attack takes place at the World Trade Center complex causing the buildings to explode and collapse, or if it takes place at the White House, or Pentagon, it is clearly high profile. Thus, the location can be factored in. In other circumstances, however, the act itself may be the major factor such as the case in Sandy Hook Elementary School, a nationally unimportant location but a horrific act that made national news nonetheless. The most important factor, of course, is media attention. Regardless of location or the act, if the media picks up the story and runs it simultaneously on all major mainstream channels, the incident can be considered a “high profile event.”

2. Changing Stories: In informed researching circles, it is well-known that the information that comes out shortly after the event is usually the most reliable. This is not to discount the existence of confusion related to panicked reports coming from eyewitnesses and the like. However, the information coming out early on has not yet been subjected to the top-down media revision that will inevitably take place as the story becomes molded to fit the narrative pushed by the individuals who either directed the attack at the higher levels or at least have connections with those who are able to control the manner in which various media outlets report the event.

3. Simultaneous Drills: One hallmark of the false flag operation is the running of drills shortly before or during the actual attack. Many times, these drills will involve the actual sequence of events that takes place during the real life attack . These drills have been present on large scale false flags such as 9/11 as well as smaller scale attacks like the Aurora shooting.

This entry was posted in Domestic Enemies, Editorial and tagged false-flag. Bookmark the permalink.

1 Response to 11 Signs of a False Flag