After the Collapse: Six Likely Events That Will Follow an Economic Crash 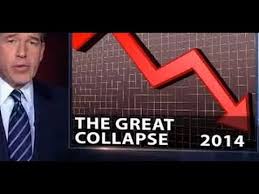 We know a collapse is coming… If you’re paying attention you probably have the distinct feeling that we are in the middle of it right now. And guess what? The government and military know it’s coming too, as evidenced by large-scale simulations of exactly such an event and its fallout.

But the collapse of our financial system, or hyperinflation of our currency, or a meltdown in US Treasuries is only the beginning. We know some or all of these events are all but a foregone conclusion.

What we don’t know is the timing of the trigger event that causes the global panic to ensue and what will happen after these primary events take hold.

According to Jeff Thomas, while we can’t know for sure, the following “secondary events” are the most likely outcomes when the system as we have come to know it destabilizes.

But, along the way, there will be numerous surprises—actions taken by governments that may be as unprecedented as they would be unlawful. Why? Because, again, such actions are the norm when a government finds itself losing its grip over the people it perceives as its minions. Here are a few:

This entry was posted in Editorial, Safety and Preparedness and tagged Econom, Mac Slavo. Bookmark the permalink.