And What of Four Dead Americans?

The Benghazi tragedy has finally been unveiled. So what will be the consequences of a failed state department policy and what will become a bigger coverup than Watergate. I could say that it is nothing that this pResident does not deserve but we must not forget the four Americans who lost their lives: 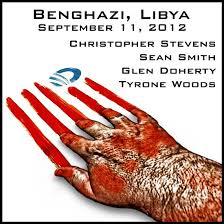 Hillary Clinton’s famous words “What difference does it make?” must never be forgotten.

We must also never forget the Americans that were rescued from Benghazi and subsequently kidnapped to keep silent. When will they be freed?

This entry was posted in Editorial and tagged Benghazi, Candy Crowley, Obama. Bookmark the permalink.