Ann Barnhardt on Ukraine: You Better Pay Attention Because That’s How It’s Eventually Going to Play Out in North America. 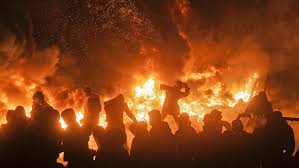 There is basically a media blackout on the counter-revolution in Ukraine, but y’all better pay close, close attention, because

A.) decent human beings are being slaughtered in the streets for standing up to an illegitimate government and this ALWAYS merits attention as a function of simple charity and

B.) I think the events in Ukraine are a foreshadowing or prototype of what will eventually play out in North America.  The two situations have many similarities.

Please note that I used the term “counter-revolution” with regards to Ukraine.  Remember, “revolution” refers to any movement that turns AWAY from God.  Without doubt or question, the tyrannical Ukrainian oligarchy executed a cold revolution in which it turned away from God and toward Moscow, Putin and their own personal enrichment.  The “revolution” is a fait accompli.  What the people of Ukraine have been and are now doing is COUNTER-REVOLUTION.  They are sick and tired of being used and abused by a cadre of oligarchs who are toadies of Putin.  They want to turn back toward justice, honesty in government and the rule of law.  Again, Putin is an evil, evil, evil man.  You people who are still falling for his garbage need to wise up.  He is playing you for a fool.  Just because he goes into a church and crosses himself and makes token gestures against sodomites doesn’t make him good.  It makes him politically savvy and nothing more.  If Obama learns to cross himself (assuming that the action wouldn’t cause him to burst into flames or melt), are you going to fall all over him too?  Guys, Putin and Obama are cut from the same cloth.  It is not impossible that Obama has explicit ties to Moscow, and may have even been in Moscow for a time during the missing two years in the early 80′s when he claims to have been at Columbia in NYC, but was almost certainly nowhere near that sulfuric hive of iniquity.

Maybe we should just keep our hands off Ukraine? No foriegn entanglements, and have a drink with all! 🙂