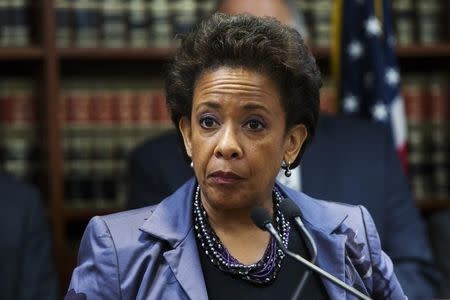 She’s an under-the-radar contender to become the first black woman to head the Justice Department.

Loretta Lynch rarely holds news conferences, does interviews or gives speeches in her current job as U.S. attorney in Brooklyn. But the lack of a paper trail on Lynch hasn’t kept her from emerging in recent weeks as one of only a handful of people still under consideration by the White House to replace the outgoing Eric Holder as attorney general.

The buzz over the 55-year-old Harvard Law School graduate was apparent as she sat next to Holder for his appearance at a ceremony last week in Brooklyn highlighting efforts to divert low-level offenders into drug rehab and job diversion programs, one of the attorney general’s pet causes. In her introduction of Holder before an audience that included U.S. Attorney Preet Bharara of Manhattan — considered another attorney general contender — a judge made clear who she favors for the job.