Can Obama Read Between the Lines?

Posted on September 4, 2013 by DRenegade 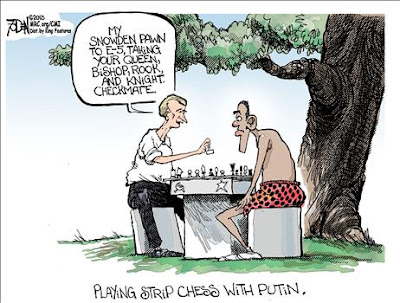 Russian President Putin has now stated that he may drop his support of Assad in Syria if Obama can prove that his case concerning the use of chemical weapons against the rebels. This would be quite a reversal since Russia’s naval stations in Tartus and Latakia would be at risk if Assad is removed. But what if Putin knows that the United States was complicit in this attack as is now being reported. This would not only make this an empty promise, it would put pressure on Obama to prove his case. Prior to any military action.

As usual, Putin is playing chess and Obama is playing checkers. The clock is ticking as the October budget/economic crisis is looming. This distraction to what may become our economy’s collapse can only be covered over by this “pending war” for so long. Let us pray that our military will remove its “commander-in-chief” is any order to start an unConstitutional war is issued since it now appears that our Congress  is under the control of NSA blackmail.

Putin says could turn against Assad – if case proved

President Vladimir Putin offered a glimpse of international compromise over Syria on Wednesday, declining to entirely rule out Russian backing for military action as he prepared to host a summit of world leaders.

As the United States and allies prepare to bypass any Russian U.N. veto and attack Damascus, there is little chance of Putin’s support. But his words may herald new efforts to overcome great power rivalries that have let Syria descend into bloody chaos.

At the same time, Moscow said it had sent a warship it calls a “carrier killer” to the eastern Mediterranean, where a U.S. fleet is waiting for Congress to approve orders from President Barack Obama to launch punitive strikes against Syrian President Bashar al-Assad following his forces’ alleged use of poison gas.

what if Putin knows that the United States was complicit in this attack as is now being reported. This would not only make this an empty promise, it would put pressure on Obama to prove his case.

I believe that this is right on.