DEBKA Exclusive: What were the six points Obama sent Khamenei through Erdogan? 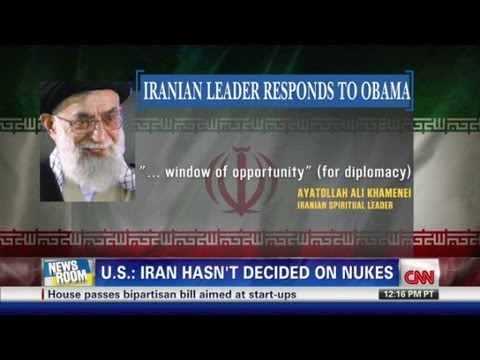 After a two-hour, 15-minute conversation with US President Barack Obama in Seoul on March 25, Turkish Prime Minister Tayyip Erdogan undertook to fly to Tehran and personally hand Obama’s six-point message to Iran’s Supreme Leader Ayatollah Ali Khamenei. The note, which laid out the American position for the nuclear talks between Iran and six world powers that were scheduled to open in Istanbul on April 13, was delivered on March 29.

DEBKAfile’s Iranian sources report that the exercise was not a success.
The Iranian leader has not replied to the US president’s communication up until the present. Instead, in the past week, Tehran has turned its guns on Prime Minister Erdogan and refused to accept Turkey as venue for the nuclear talks.
Washington has explained this setback by a controversy among heads of the regime in Tehran over the US President’s six points. Our Iranian sources strongly doubt this since, quite simply, the Islamic regime is a one-man show. Khamenei makes the decisions and he has clearly decided not to send a reply.

DEBKA-Net-Weekly 535 of March 29 was the first world publication to reveal the content of Obama’s six-point message to Khamenei.
That is now revealed here for the benefit of DEBKAfile’s readers:
1.  Tehran must come to the talks ready to show it is seriously and genuinely open to a compromise deal on its nuclear program;

2.  A negative attitude on Iran’s part would result in President Obama merging the back-channel US-Iranian dialogue with the formal diplomatic negotiating track. (DEBKA-Net-Weekly 534 reported on March 22 that Washington was satisfied with the secret talks it has been conducting with Tehran and was ready to wind down sanctions.)
He asked the Turkish prime minister to inform the Supreme Leader that the Russian and Chinese presidents, Hu Jintao and Dmitry Medvedev, had agreed to go along with this position if Khamenei found it acceptable.

3.   Any deal would require a commitment from Khamenei to freeze – though not dismantle – all aspects of Iran’s nuclear program from the moment an accord was reached. No new projects must be initiated and all progress arrested.
For example: The centrifuges already functioning in the Fordo underground plant near Qom must not be expanded; research on nuclear weapons and the construction of models be discontinued; and the transition of uranium enrichment from 3.5 percent grade to 20 percent halted.
The entire program would remain frozen in place.

4. President Obama asked Erdogan to convey a personal message from him to the Iranian leader:
He was favorably impressed with the ayatollah’s comments in the New Year speech he broadcast live on state television Tuesday, March 20: “We do not have nuclear weapons and we will not build them,” said the ayatollah. “But in the face of aggression from enemies, whether from America or the Zionist regime, we will defend ourselves with attacks on the same level as our enemies attack us.”

Obama also responded to another Khamenei remark. Addressing thousands of pilgrims gathered at the Imam Reza Shrine in Mashhad, the Supreme Leader said: “The Americans are making a grave mistake if they think that by making threats they will destroy the Iranian nation.”

To this, the US President answered that neither he nor America entertained any such intention.

5. Tehran must change the hostile anti-US tone of its speeches and publications and stop calling America an enemy and the Great Satan. In place of antipathy, Obama would deeply appreciate a series of helpful comments coming from Iranian leaders and news reports out of Tehran, especially if they highlighted an improved Islamic Republican attitude towards the United States as a result of his administration’s polices.
Erdogan was asked to hold up as an example of the sort of remark Obama had in mind the words of praise Khamenei offered President Obama on March 8, “for promoting diplomacy rather than war” as a solution to Tehran’s nuclear ambition.
More of this sort of rhetoric would be welcome, the Turkish prime minister was directed to inform Tehran.

The US presidential campaign was never mentioned, DEBKA-Net-Weekly’s sources note. However, the rewards accruing to Tehran from extending a helping hand for Obama’s reelection were evident in the subtext.

Benign Iranian references to America would allow Obama to credit his foreign policy with kudos for an important breakthrough to the Islamic Republic. The improved climate surrounding relations would reduce the hazards of a war being launched against Iran. By helping to get him returned for a second term, Tehran would find the US president ready to pursue policies agreed between him and Khamenei in the course of their secret dialogue.
6. Erdogan was asked to explain the US President’s strategy of drawing a close linkage between the shifts in US policy on Iran and its nuclear program, on the one hand, and the Syrian crisis, on the other. This approach had guided Obama’s hand in his thus far successful moves to block Muslim-Arab-Western military intervention in Syria.

The US president believes that a coalition working on the Syrian crisis, composed of Washington, Moscow, Beijing, Tehran and the United Nations (the UN and Arab League envoy former UN Secretary General Kofi Annan was mentioned in this regard) could be equally successful in resolving the Iranian nuclear controversy.

What can one expect from a lunatic trying to communicate with a bunch of imbeciles? Nothing but slobbering dribble! That’s exactly what Obama achieved.