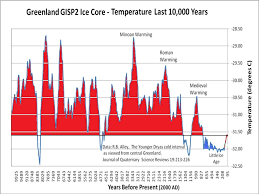 According to the New York Times, our global temperatures are the highest (or warmer) than at any other time in at least 4000 years. One of the world’s “experts” made this statement:

Michael E. Mann, a researcher at Pennsylvania State University who is an expert in the relevant techniques but was not involved in the new research, said the authors had made conservative data choices in their analysis.

“It’s another important achievement and significant result as we continue to refine our knowledge and understanding of climate change,” Dr. Mann said.

A quick Google search of “Michael Mann Fraud” returns 598,000 hits. His famous “hockey stick” paper has been discredited and he has filed a lawsuit for defamation of character. He has been compared to another famous Penn State name: Jerry Sandusky.

It is curious why anyone would resort to using a discredited “researcher” as a source to validate the “news”.

Global temperatures are warmer than at any time in at least 4,000 years, scientists reported Thursday, and over the coming decades are likely to surpass levels not seen on the planet since before the last ice age.

Previous research had extended back roughly 1,500 years, and suggested that the rapid temperature spike of the past century, believed to be a consequence of human activity, exceeded any warming episode during those years. The new work confirms that result while suggesting the modern warming is unique over a longer period.