Honor Must Be Defended 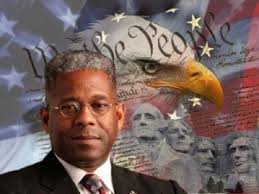 We finally have a politician who will stand up and defend their honor in Washington, DC. The following story from tampabay.com reports how Rep. Allen West responded to criticism by Debbie Wasserman Schultz concerning the debt ceiling crisis. It is very rare to see a politician stand up and defend their honor since honor is in short supply in our society. Sacred honor as found in our forefathers is non-existent in political circles as back room deals and power override any sense of duty to our country.

It is a pleasant surprise to see a politician who will not only stand up for their honor but also show that they are a statesman. Rep. West is quite an eloquent speaker whose personal convictions are resonating throughout the nation. We used to have statesmen who would stand up and make society take the righteous path in order to maintain our republic. How many politicians would you classify as a “statesman” today? I would classify our president as a “teleprompterman” and most of Congress as “highwaymen”. The hope and change needed to restore our country will reside in statesmen who are willing to display the courage to defend their positions when their honor is attacked.

Florida was at war on the floor of the U.S. House on Tuesday.
Rep. Allen West tore into a fellow South Florida Rep. Debbie Wasserman Schultz with a personal e-mail that decried her as the “most vile, unprofessional, and despicable member of the US House of Representatives.”

Her offense? Criticizing West for supporting the House GOP’s “cut, cap and balance” debt-reduction plan that Wasserman Schultz said would hurt Medicare recipients in Florida. Wasserman Schultz spoke on the House floor shortly after West had given a speech in favor of the plan. He learned of her words and fired off the e-mail, which rocketed around Washington.

The subject line of the e-mail: “Unprofessional and Inappropriate Sophomoric Behavior from Wasserman Schultz.”

“Let me make myself perfectly clear, you want a personal fight, I am happy to oblige,” wrote West, a tea party favorite elected in November. “You are the most vile, unprofessional, and despicable member of the US House of Representatives.

“If you have something to say to me, stop being a coward and say it to my face, otherwise, shut the heck up. Focus on your own congressional district!”

Wasserman Schultz of Weston is chairwoman of the Democratic National Committee and her criticism of the Republican plan calling for deep spending cuts was fairly standard.

But it touched a nerve with West, who is also from Broward County.

The GOP-controlled House passed the debt-reduction plan on a nearly party-line vote. But it’s dead in the Senate, which is led by Democrats.

1 Response to Honor Must Be Defended