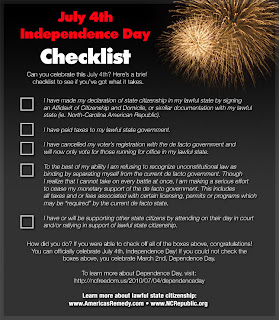 Do you celebrate Independence Day on July 4th? Most folks do. After all, fireworks are hard to resist. However, because the majority of Americans today recognize the government which was put into place March 2, 1867, they should actually be celebrating a little known holiday called Dependence Day. On March 2nd, 1867 the first of the unconstitutional Reconstruction Acts was passed. These acts annulled State governments, subjugated their citizens, created new States with new body politics (which are now being recognized), and unconstitutionally coerced the adoption of the 14th Amendment. This did away with states rights, nationalized our citizenship and totally removed the principles of self government and independence which had been established nearly 100 years before.

So this July 4th when someone says “Happy Independence Day”, perhaps your response should be, “Are you a state citizen?” Because unless they are, they may want to shoot their fireworks on March 2nd.
Check out the proclamation below for a short history lesson, and learn more about state citizenship at AmericasRemedy.com and NCRepublic.org.
More…