Is it More Treasonous to Violate the Constitution or to Expose Those Violations? 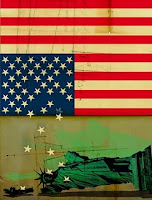 Establishment pundits are frantically attempting to make the NSA spy scandal story about whether the whistleblower is a hero or a traitor instead of debating the real issue — whether broad government spying on U.S. citizens violates their Constitutional rights.

This divide-and-distract strategy has long been used to protect the real criminals to a free society. Some officials are taking the extreme position that the NSA whistleblower, Edward Snowden, committed treason by releasing proof of what most Americans already suspected, that their every move is being spied on by their government.

These officials, like Rep. Peter King (R-NY) and Sen. Dianne Feinstein (D-CA), also happen to be the staunchest advocates for destroying the Bill of Rights, the Fourth Amendment in particular. Snowden broke a corporate disclosure contract; these officials broke their oath to the Constitution. Who are the real traitors here?