Is the Resistance Forming in Colorado? 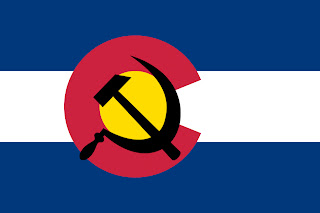 I have watched Colorado devolve into a liberal cesspool of government tyranny over the past thirty years. I cannot understand how people in Colorado Springs and Fort Collins could be in the same state as people in Boulder. Whether the causes of this are apathy, Californication, illegal aliens, voter fraud or a combination of factors, the end result is the same.

What will be the consequences of an all out attack on the 2nd amendment by the Obama administration using Colorado as a proxy? The whole country will be watching to find out. Is “Resistor in the Rockies” representative of the resistance in Colorado? Let’s hope so.

New York: are you watching? Washington, D.C.: do you understand the concept of a wildfire?

They Heard Us and They Ignored Us – Prepare for Consequences

The amount of gun owners and citizens rallying against the Commierado gun bills were overwhelming when the bills were heard last month in the House committee and today in the Senate Committee.

Each time, the Democratic controlled House and Senate voted in favor of the bills.

One ignoramus in the House went so far as to say that women didn’t need to carry guns on campus for self-defense. His reasoning?

And today people participated in, and as of this post, still are driving around the capitol and honking their horns in disapproval of these bills.

And since the hearings got underway, a persistent wail of honking horns and car alarms has been heard inside the hearing rooms, signaling the determination of some opponents, many frustrated at the limited time allowed for official testimony, to make their opposition heard.
(source)

But regardless of the push against these bills, as of this post, 3 of the 7 bills have passed so far.

2 Responses to Is the Resistance Forming in Colorado?