The Wall Street Journal has posted an article concerning the 2012 presidential elections that has more truth than the people want to hear. If the election is close, the Democrats win because they have the numbers. Although the 2010 census shifted some of the electoral college votes, there are just more looters than producers as Ayn Rand outlined in Atlas Shrugged.

With hands out and promises of redistribution, eighteen blue states will give Obama 90% of the electoral college votes needed to win. Looking at the map below also shows another mathematical corollary: the states with the worst economy are the states that will hand Obama another four years if the analysis is correct.

The life blood of the productive states is being drained by the blue states: an Obama victory will be the end of this country. That is making the assumption that we will have elections in 2012. 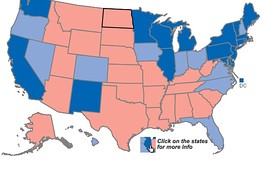 Blue-State Math Is Boon to Obama, Target for GOP

The important thing to remember about a presidential election is that it isn’t a contest to win the popular vote nationwide. It is a contest to win in a combination of states that will produce the 270 votes in the electoral college that give a candidate the majority there.

Therein lies the Democrats’ built-in advantage. They happen to start with a bloc of reliably blue states that is larger, and much richer in electoral votes, than the reliably red bloc Republicans have on their side. If a Democratic presidential candidate merely hangs on to this trove of deep-blue states, he or she is a long way down the road to victory.

Specifically, there are 18 states plus the District of Columbia that have voted Democratic in all five presidential elections since 1992. Combined, they carry 242 electoral votes—90% of the votes needed for victory.

Republicans have a much smaller bloc of highly reliable electoral college votes. There are just 13 states that have gone red in each of the last five elections, and they deliver 102 electoral votes, less than half of the number needed.

5 Responses to It’s the Looters, Stupid