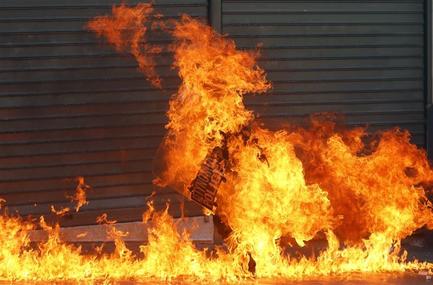 A riot policeman is engulfed by flames after a protester threw petrol bombs in Athens’ Syntagma square during a 24-hour labor strike September 26, 2012. Greek police fired teargas at hooded youths hurling petrol bombs and stones as tens of thousands took to the streets in Greece’s biggest anti-austerity demonstration in months on Wednesday. REUTERS-Yannis Behrakis

Anti-cuts protests erupt on streets of Athens and Madrid

Demonstrators have clashed with police on the streets of Athens and Madrid in an upsurge of popular anger at new austerity measures being imposed on two of the euro zone’s most vulnerable economies.

In some of the most violent confrontations on Wednesday, Greek police fired tear gas at hooded rioters hurling petrol bombs as thousands joined the country’s biggest protest in more than a year.

The unrest erupted after nearly 70,000 people marched to the Greek parliament chanting “EU, IMF Out!” on the day of a general strike against further cuts demanded by foreign lenders.

In Madrid, Prime Minister Mariano Rajoy faced violence on the streets of the capital on Tuesday, and growing talk of secession in Catalonia as he moves cautiously closer to asking Europe for a bailout, aware that such an action has cost other European leaders their jobs.