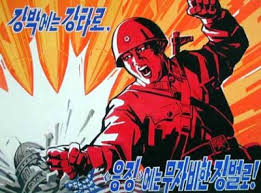 North Korea said on Tuesday its military would be put on high alert and be ready to launch operations, stepping up tension after weeks of rhetoric directed against the United States and South Korea, who it accuses of instigating hostility.

Reclusive North Korea has often issued threats to attack the South and the United States but has rarely turned them into action. Such hostile rhetoric is widely seen as a means to perpetuate its domestic and international political agenda.

In the latest outburst, a spokesman for the North’s military warned the United States of “disastrous consequences” for moving a group of ships, including an aircraft carrier, into a South Korean port.

This entry was posted in Editorial, War and tagged North Korea. Bookmark the permalink.