Obama to Israel: You’re On Your Own 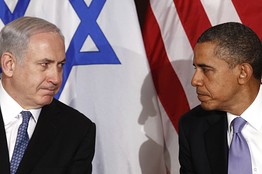 Does President Obama want Israel to bomb Iran before the election? If we had more faith in this Administration’s competence, we’d be tempted to think so.

Both publicly and behind the scenes, Administration officials have insisted they oppose a unilateral Israeli strike for many reasons: Diplomacy and sanctions still need time to work; an Israeli attack could destabilize the region; Israel doesn’t have the military means to do the job thoroughly; and so on.

It’s no secret the Israelis don’t want to strike Iran either, provided the U.S. is serious about keeping a bomb out of the mullahs’ hands. But Israel’s confidence in Mr. Obama’s seriousness is fading fast. This week, Secretary of State Hillary Clinton told Bloomberg Radio that “we’re not setting deadlines” for Iran to halt its program.

That prompted Israeli Prime Minister Benjamin Netanyahu to note that “those in the international community who refuse to put red lines before Iran don’t have a moral right to place a red light before Israel.”

This entry was posted in Editorial and tagged Israel, NC Renegade, Obama. Bookmark the permalink.