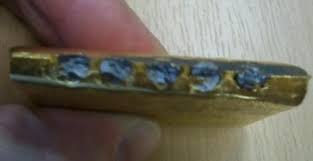 An Austrian banking source has reportedly claimed that Deutsche Bank ‘fulfilled’ one gold repatriation in recent years with the help of Tungsten and further claims that the tungsten salted gold bars have turned up in Asia.

In 2009, Rob Kirby first uncovered detailed information regarding a massive plot to replace 400 oz good delivery gold bars with highly sophisticated tungsten filled fakes – and even provided evidence that the bars had been swapped with the gold held at Fort Knox.

Widely scoffed at by the financial media in 2009, Kirby appears to have released a Pulitzer worthy story nearly half a decade ahead of its time, as if the Austrian source’s claims are true and Deutsche Bank has in fact fulfilled a recent gold repatriation request with gold plated tungsten, the ramifications are that not only is every single claim made by GATA regarding gold and silver manipulation are 100% accurate, but that real, physical metal is now in desperately short supply and the jig is nearly up for the bullion bank cartel.