The following is the global financial pyramid scheme by the numbers… 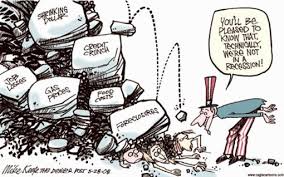 The following is the global financial pyramid scheme by the numbers…

–$9,283,000,000,000 – The total amount of all bank deposits in the United States.  The FDIC has just 25 billion dollars in the deposit insurance fund that is supposed to “guarantee” those deposits.  In other words, the ratio of total bank deposits to insurance fund money is more than 371 to 1.

–$212,525,587,000,000 – According to the U.S. government, this is the notional value of the derivatives that are being held by the top 25 banks in the United States.  But those banks only have total assets of about 8.9 trillion dollars combined.  In other words, the exposure of our largest banks to derivatives outweighs their total assets by a ratio of about 24 to 1.

Are you starting to get the picture?

This entry was posted in Editorial, Financial and tagged Economic Collapse. Bookmark the permalink.