The Situation in the Hellenic Republic Is Still Evolving 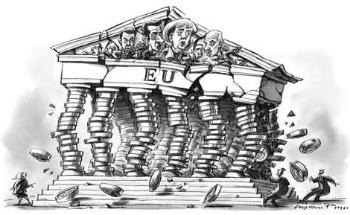 Once again, the ISDA has issued a decision that a Greek credit event has not occurred with the inclusion of retroactive “collective-action clauses (CAC) in its sovereign debt. Standard & Poor’s cut Greece’s credit rating to SD (Selective Default) over this issue.

This is another example of the continued manipulation of the world’s financial markets to the detriment of individual national sovereignty and the degradation of currencies (your savings). How long can the EU “kick the can” to postpone their economic collapse? As long as the people continue to allow it.

Who will be bankrupted when a Greek default is officially declared and the banks collapse? The people on the ISDA who just decided that a credit event did not occur. As soon as these bankers have secured their money, the event will be declared.

ISDA EMEA Determinations Committee: Credit Event Has Not Occurred with Respect to Recent Questions on The Hellenic Republic Restructuring

In light of today’s EMEA Determinations Committee (EMEA DC) unanimous decisions in respect of the two potential Credit Event questions relating to the Hellenic Republic (DC Issue 2012022401 and DC issue 2012022901), the EMEA DC has agreed to publish the following statement:

The first submitted question (DC Issue 2012022401) asked whether the holders of Greek law bonds had been subordinated to the ECB and certain NCBs whose bonds were acquired by the Hellenic Republic prior to the implementation of new Greek legislation such that such subordination constitutes a Restructuring Credit Event. (The full text of the question is available here http://www.isda.org/dc/view.asp?issuenum=2012022401.)

The EMEA DC unanimously determined that the specific fact pattern referred to in the first submitted question does not satisfy either limb of the definition of Subordination as set out in the ISDA 2003 Credit Derivatives Definitions (the 2003 Definitions) and therefore a Restructuring Credit Event has not occurred under Section 4.7(a) of the 2003 Definitions.

The second submitted question (DC Issue 2012022901) asked whether there had been any agreement between the Hellenic Republic and the holders of private Greek debt which constitutes a Restructuring Credit Event. (The full text of the question is available here http://www.isda.org/dc/view.asp?issuenum=2012022901.)

The EMEA DC determined that it had not received any evidence of an agreement which meets the requirements of Section 4.7(a) of the 2003 Definitions and therefore based on the facts available to it, the EMEA DC unanimously determined that a Restructuring Credit Event has not occurred under Section 4.7(a) of the 2003 Definitions.

The EMEA DC noted, however, that the situation in the Hellenic Republic is still evolving and today’s EMEA DC decisions do not affect the right or ability of market participants to submit further questions to the EMEA DC relating to the Hellenic Republic nor is it an expression of the EMEA DC’s view as to whether a Credit Event could occur at a later date, in each case, as further facts come to light.