Traditionalists and Pope Francis: Can We Take a Deep Breath and Please Calm Down? 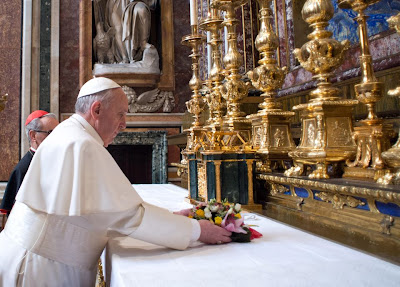 Yes, I know. Cardinal Burke wasn’t elected Pope. I’ll be eating humble pie for the rest of Lent. I’m not worried about that.

Here’s what I am deeply worried about:

Pope Francis hadn’t been elected for more than two hours and the vitriol began to spew forth in the comment boxes of this blog and others. Many from the traditionalist crowd reacted against Pope Francis with words that were downright offensive. If one of my sons spoke like that about a priest (or any older man, for that matter), my boy would have a sore backside and a long stay in a dark room.

Within minutes of His Holiness’ appearance on the loggia, some trads began an online campaign claiming that he was a persecutor of orthodox priests in Argentina. Then they said he forbade the Latin Mass in his diocese. Then they were mocking him for not wearing the scarlet papal mozzetta. They also expressed dismay over how His Holiness prayed in Italian and not in Latin. Next, they expressed their alarm that he took off his stole immediately after the blessing. Then they made much ado over how the tapestry unfurled over the balcony wasn’t that of His Holiness’ predecessor. And these comments aren’t even the worst of it. I don’t even want to list some of the other things they have written online.

This entry was posted in Editorial, Religion and tagged Pope Francis. Bookmark the permalink.