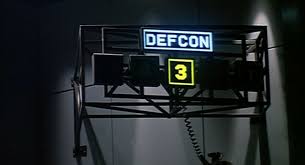 Friday, April 12, the US raised its nuclear alert status to DEFCON 3, Condition Yellow (out of 5 levels), stating “There are currently no imminent nuclear threats against the United States at this time, however the situation is considered fluid and can change rapidly.” Many believe that North Korea will launch their test missile on or about April 15. Japan has instructed its armed forces to shoot down any North Korean missile that heads toward its territory.

Contrary to comments from the White House Thursday, the Pentagon reported that “North Korea probably has nuclear weapons that can be mounted on ballistic missiles.” This is a very significant admission by the United States and a dangerous change to the Korean situation.

China has mobilized its military and is massing near the border with North Korea. This step was taken after North Korea placed a mid-range Musudan missile ready to launch on its east coast and its “dedication of more facilities at the Yongbon complex to nuclear weapons work.”

According to some sources in Washington, the Chinese military mobilization is not directed at deterring Pyongyang but as support for North Korea’s steps.
Late Thursday, Representative Doug Lamborn, a Colorado Republican, made a disquieting disclosure. He quoted an excerpt from a Defense Intelligence Agency report expressing “moderate confidence” in the finding that North Korea has nuclear weapons capable of delivery by ballistic missiles whose “reliability will be low.”