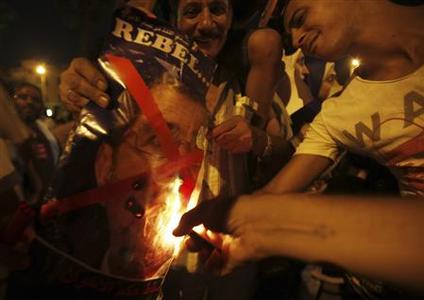 Protesters opposing Egyptian President Mohamed Mursi shout slogans and burn a defaced poster of him, in front of the Ministry of Defense in Cairo June 26, 2013. REUTERS-Amr Abdallah Dalsh

Egypt’s leading religious authority warned of “civil war” on Friday and called for calm after a member of the ruling Muslim Brotherhood was killed ahead of mass rallies aimed at forcing the president to quit.

“Vigilance is required to ensure we do not slide into civil war,” the Al-Azhar clerical institution said in a statement reported by state media. It blamed “criminal gangs” who attacked mosques for street violence. Clashes linked to the political tensions have killed five and wounded scores in recent days.

The Brotherhood said all those killed were Mursi supporters, though this could not be independently verified.

U.S. soldiers set to deploy to Egypt at a tense time

And yet, Obama is sending 400 US soldiers to Egypt: