Get Out of the Stock Market 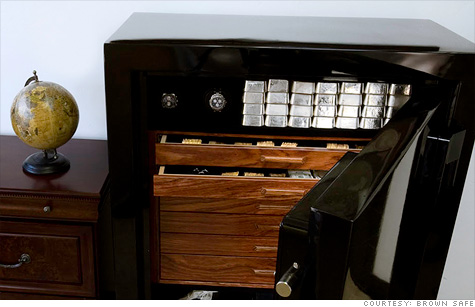 Last week’s stock market roller coaster ride indicates only one course of action: get out of the stock market. Does anyone else but me think that going below 400,000 to only 395,000 jobless claims is really good news? Remember three weeks ago when the same news was reported and the market rose? Remember the following week when the number was revised upward to over 400,000 with no notice?

The picture above is from a story detailing the sales of safes and vaults:

Amid the market turmoil, sales of security safes and vaults have spiked. While some shoppers sought to protect whatever valuables they had left, others needed a place to stash their newly-acquired safe haven assets such as gold and cash.

The picture shows twenty-eight 400 ounce silver bars on the top shelf. At current market pricing, this is $437,584.00. The gold and currency shown bring the value to over $1,000,000. Whether this is a picture of a client’s safe or only an expensive photo op, the intent is clear: people who have money are taking it out of the market and putting it into precious metals and cash. The graph below shows the stock market (black) versus gold (green) last week:

The volatility in the market shows it is either being manipulated or people buying stock are indecisive in a big way. Tuesday’s 600 point upswing in 45 minutes is not the result of rational financiers. Mood swings last week indicate a market in turmoil and that is not where rich people put their wealth.

The rush to buy gold last week was so high, the margin limit was raised in order to stop its rapid ascent. People who bought gold on margin had to sell part of it to cover the new margin  requirements.

The news this week will be focused on Europe. Their financial problems are far from being solved and the one remedy to issue Eurozone bonds has been killed by France and Germany.

Germany and France rule out eurobonds

Germany and France are ruling out common eurozone bonds to solve the bloc’s current debt crisis, in spite of renewed pressure ahead of a meeting of chancellor Angela Merkel and president Nicholas Sarkozy on Tuesday.

Wolfgang Schäuble, German finance minister, made clear in an interview with Der Spiegel, that Berlin remains opposed to such a policy.

Expect the civil unrest to spread throughout Europe this week due to financial austerity measures and class warfare. Another story to watch this upcoming week will be Moody’s. If they downgrade France or the United States, the stock market will be volatile but only in one direction.