Italy’s Property Confiscation Is Next 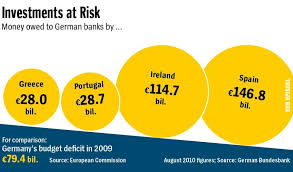 So now we are seeing what “fair share” really means: confiscation.  Eat the “rich” to feed the poor has been a refrain since the 1960’s. Except now the banks are the ones being fed. Merkel is pulling the strings but the world’s economic future is at risk. As we are seeing unfold. Economic contagion is spreading in Europe: Cyprus was first and Italy seems to be next in line. Spain, Portugal, Greece, Ireland and France? Batter up: it is the bottom of the ninth, with 1 out and 2 strikes against Italy.

While some argue that Cyprus was “one of the biggest money-washing machines for Russian criminals,” and others that Cyprus ex-Pat community and energy resources brough deposits (not to say their high deposit interest rates), it seems the European Union (IMF et al.) have decided that the route to crisis stabilization, just as we outlined here over a year ago and updated here, is through a wealth tax.

However, as Handelsblatt reports, the gross distortions of wealth distribution among both core and peripheral nations (evident in the chasm between ‘mean’ and ‘median’ net assets – or wealth) makes some nations more ‘capable’ of ‘giving’ and as Commerzbank’s chief economist notes, median wealth in Italy is EUR164,000 (as opposed to Austria’s median of around EUR76,000 and mean of around EUR265,000) meaning that in theory Italy has no debt crisis (with net assets at 173% of GDP) – significantly more than the Germans at 124% – “so it would make sense, in Italy a one-time property tax levy,” he suggested.

“A tax rate of 15% on financial assets would probably be enough to push the Italian government debt to below the critical level of 100% of gross domestic product.” So there you have it, the ‘new deal’ in Europe, as we warned, is ‘wealth taxes’ and testing the “capacity of Cypriots” appears to be the strawman on what the public will take before social unrest becomes intolerable.

Government Wealth Confiscation In Cyprus: A Peek Into The Future?

[…] Italy’s Property Confiscation Is Next […]