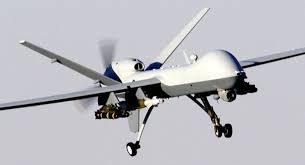 Drones have taken centre stage in an escalating arms race between China and Japan as they struggle to assert their dominance over disputed islands in the East China Sea.

China is rapidly expanding its nascent drone programme, while Japan has begun preparations to purchase an advanced model from the US. Both sides claim the drones will be used for surveillance, but experts warn the possibility of future drone skirmishes in the region’s airspace is “very high”.

Tensions over the islands – called the Diaoyu by China and the Senkaku by Japan – have ratcheted up in past weeks. Chinese surveillance planes flew near the islands four times in the second half of December, according to Chinese state media, but were chased away each time by Japanese F-15 fighter jets. Neither side has shown any signs of backing down.

Japan’s new conservative administration of Shinzo Abe has placed a priority on countering the perceived Chinese threat to the Senkakus since it won a landslide victory in last month’s general election. Soon after becoming prime minister, Abe ordered a review of Japan’s 2011-16 mid-term defence programme, apparently to speed up the acquisition of between one and three US drones.

This entry was posted in Editorial, War and tagged China, Drones, Japan. Bookmark the permalink.