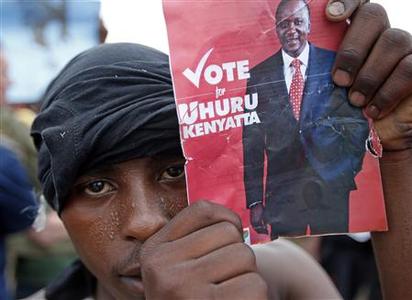 A supporter of presidential candidate Uhuru Kenyatta celebrates on the outskirts of Nairobi March 9, 2013. REUTERS-Goran Tomasevic

Kenyatta, indicted for crimes against humanity, was declared winner of Kenya’s presidential election on Saturday with a tiny margin, just enough to avoid a run-off after a race that has divided the nation along tribal lines.

The analogies are endless.

This entry was posted in Editorial, Elections and tagged Kenyatta. Bookmark the permalink.