Mel Watt: Who Better to Oversee the Hen House? 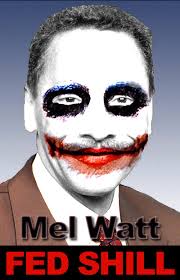 Obama’s latest appointment once again shows a “lack of diversity”. However it also shows a lack of good judgment as Mel Watt is in bed with both the Federal Reserve and the nation’s banks.

But then as we head into another housing collapse, it may be that Mr. Watt will become the fall guy.

In Whose Pocket Is The New Head Of Fannie And Freddie?

Following the earlier reported devastating news for Mark Zandi fans (all one of them, including Mr. Zandi himself) that the Moody’s economist/ADP seasonal adjuster, will not be the next head of the GSEs, and instead that privilege will go to North Carolina Democrat Mel Watt, we decided to take a quick look in whose pocket the career Congressman (elected into congress in 1992) truly lies. We are delighted to announce that with Mr. Watt’s lobbying dollars coming almost exclusively from Wall Street, Lawyers/Law Firms, and Labor Unions, the $7+ trillion in US mortgages, and sole source of mortgage creation in the US, is in “very good”, if just a little conflicted and quite socialist, hands. Mortgage forgiveness-demanding, crony capitalist comrades of the world, unite! (while charging $1000/hour)