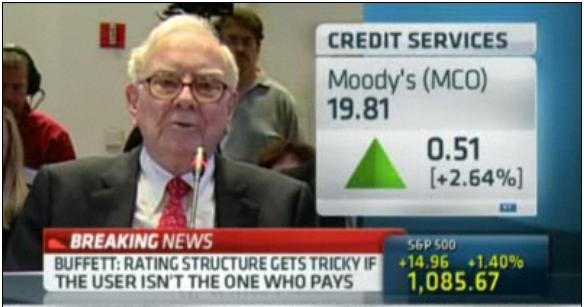 Moody’s downgraded Japan’s credit rating citing weak future economic growth and the ability to pay down its huge debt. Based on this analysis, Moody’s credit analysis is either hypocritical or is based on personal interests. Standard & Poor’s downgraded the United States based on their analysis of our huge debt. Moody’s however declined to downgrade us since Warren Buffett is both a large shareholder in Moody’s and a strong supporter of the Obama administration. I wonder if Moody’s would have downgraded Japan if Berkshire Hathaway has large investments in Japanese equities?

Moody’s, the credit ratings agency, lowered Japan’s credit rating by one notch on Wednesday, warning that frequent changes in administration, weak prospects for economic growth and its recent natural and nuclear disasters made it difficult for the government to pare down its huge debt.

Moody’s Investors Service lowered Japan’s grade by one step to Aa3, the fourth highest rating, the company said in a statement.

The downgrade brings Moody’s rating for Japan in line with Standard & Poor’s, which lowered the country’s grade by one notch to AA in January, the fourth highest on its scale. Moody’s had put Japan on review for a downgrade in May.

The action comes after a round of downgrades by major ratings agencies of sovereign debt, and amid concern that the debt crisis in Europe could escalate. On Aug. 5, S.& P. cut the sovereign debt rating of the United States for the first time in the country’s history.