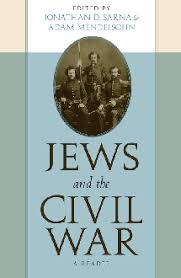 I did not know that 10,000 Jewish soldier fought in the Civil War. The information below comes from the Jerusalem Post. Two corrections: the southern states did not seek to secede, they did secede. That is why this war should be correctly called “The War of Northern Aggression”. As we are on the verge of a new War of Federal Aggression, let us pray that the ammunition stockpiles by the government will be redistributed into the proper hands.

Passover on the battlefields of the US Civil War

The US Civil War was a watershed that involved 10,000 Jewish soldiers from all over the nation fighting side by side with their gentile comrades.

It was April 24, 1864, at the height of the American Civil War, and in between his duties as an infantryman, young Isaac J. Levy sat down in camp on one of the intermediate days of Passover to write a short letter to his sister back home.

Levy, who served in the 46th Virginia infantry unit, was a soldier in the Confederate army which was battling on behalf of the southern states that sought to secede from the United States.

The war had just entered its fourth year, and it would prove to be the bloodiest conflict in American history. New research published last year in the journal Civil War History by demographic historian J. David Hacker of Binghamton University revealed the death toll may have been as high as 750,000 people.

Levy and his regiment, which included his brother Ezekiel, who served as a captain, were posted at Adams Run, South Carolina, and the fog of war had cast a shadow over his observance of the holiday.

The piece is in error. There were 10,000 Confederate Jews and I do not know how many Yankees nor have I ever been interested in finding out.:)

Here is the Bible.