Our Allies Have Abandoned the Dollar 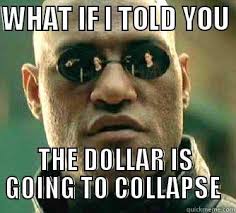 South Korea will be the next “ally” after Japan (see article below) to abandon the dollar after this weekend’s talks with China. This opportunity to destroy the dollar as the world’s reserve currency did not even take that much effort. With a foreign affairs policy in shambles that has alienated the world, an financial attack to destroy the Great Experiment was only a matter of time. And time has now run out. The consequences will be felt over a short time frame and it now appears that 2015 will actually be the year that has been foreseen as the collapse.

Just a week ago it appeared Washington had managed (for the time being at least) to convince the US’ closest allies to refrain from joining the Asian Infrastructure Investment Bank, a sinocentric institution aimed at promoting development across Asia that is meant to rival the US/Japanese-led ADB and begin a seismic shift away from the world’s traditionally US-dominated institutions such as the World Bank and the IMF. Then, much to the chagrin of Washington, the UK joined as a founding member calling it an “unrivaled opportunity.”

As we and many other observers correctly noted at the time, the move by Britain could well embolden other countries who had expressed an interest initially but been deterred by pressure from Washington to reconsider their bids for membership. In (very) short order, everyone from Germany to Australia to Luxembourg was suddenly ready to cast their lot with the Chinese despite US warnings that the bank won’t adopt the proper operational standards. As we said yesterday, the world is now wise to the fact that US criticism of the new venture is very likely nothing more than an attempt by The White House to undermine Chinese regional ambition:

…and that means in short order Australia and South Korea will likely be on board and at that point, the stigma the US has created around membership will have completely disappeared (if it hasn’t already), opening the door for other US “allies” to join despite the bank’s alleged “low” standards.

Now, it appears the last valuable friend the US has in the bid to keep China from undercutting the ADB is beginning to consider a bid to join up. Here’s more from Reuters:

The opposition to the AIIB began crumbling after Britain said earlier this month that it would join the institution, saying it was in its national interest. France, Germany and Italy swiftly followed suit.

Australia now appears close to joining, although no formal decision has been made, and Beijing said Japan and South Korea were also considering the possibility. Asked about the three countries joining the bank, China’s Foreign Ministry said it was “open” to it.

“They have all already expressed that they are contemplating the issue at hand,” ministry spokesman Hong Lei told a daily briefing. “We are open to them making the relevant decision.”

Japanese Finance Minister Taro Aso said Tokyo could consider joining the China-led bank if it could guarantee a credible mechanism for providing loans.

Obongo, the Bushes, The Clintons have destroyed our monetary system , and with the Whore illegal Phony Banking cartel our phony government under President Wilson we will suffer defeat. our nation is run by criminal banksters and the Illuminati and we all will be toast very shortly. Obongo and the democrap party as well as the republicrap party must be held accountable for treason and every one of them hanged. As nations leave the dollar which is rightfully so because of our high crimes , thefts, murders, etc, these nations are running towards a red communist dictatorship for there safety, the Communist murderers will destroy these nations eventually and it will be far worse for them under the red barbarian Marxist satanic bastards..

Tim ever
Reply to  Philip