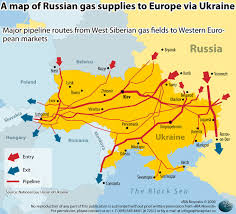 As suspected given the huge distance between the bid and offer, the EU-brokered Ukraine-Russia gas deal has failed:

Gazprom seeks $1.95bn from Ukraine for past shipments of gas by the 10am Moscow time deadline (2amET) and will continue to seek upfront payments for any further shipments.

Russia and Ukraine failed to resolve a gas pricing dispute at talks and a 0600 GMT deadline for Ukraine to pay $1.95 billion in gas debts still stands, a spokesman for Russian natural gas producer Gazprom said on Monday. Spokesman Sergei Kupriyanov said after talks in Kiev that Russia would switch to an advance payment system if it did not receive the money, meaning Moscow could cut off gas supplies to Ukraine.

Cutting supplies could disrupt the gas flow to the European Union.

This entry was posted in Editorial, Energy and tagged Ukraine. Bookmark the permalink.