THE RULE OF LAW VERSUS THE NSA 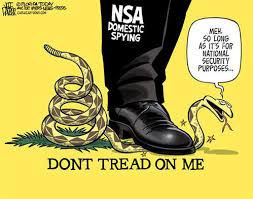 For example, consider the type of system that our American ancestors devised, one based on the rule of law. Under that system, the government was prohibited from doing such things as spying on people in general, breaking into their homes and offices, and peering into their personal effects.  The only way that the government could legally target someone for searching into his personal life was by presenting evidence to a judge that indicated that the person was involved in illegal conduct. If the judge concluded that the evidence was sufficient, he would issue a warrant specifically describing the place to be searched and the items being searched for.

That’s, in fact, the system that we still have at the state level. Under the U.S. Constitution and state constitutions, the cops are prohibited from spying on and searching everyone for the sake of ferretting out the small percentage of people committing crimes. Instead, they must wait until they secure evidence establishing “probable cause,” present it to a judge, and secure a warrant before they can target a specific person.

That’s a system based on the rule of law.

The advent of the national-security state after World War II fundamentally changed America’s constitutional structure. As we all now know, the NSA wields the power to spy on everyone and search into their personal affairs without any probable cause and without a specific warrant naming the person, the place, and the specific items being searched for. The idea is that in order to “keep us safe,” the government must spy on everyone to catch the small minority of people who are committing terrorist attacks.

That’s a system based on the rule of men. It necessarily depends on trusting people with omnipotent power.

The first step is to address the fact that the NSA surveillance is illegal and stop shooting the messenger.

This entry was posted in Domestic Enemies, Editorial and tagged NSA. Bookmark the permalink.