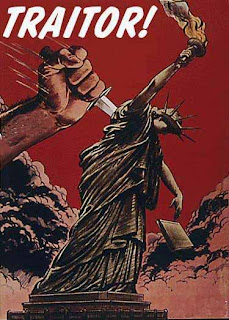 From (III-Percent Patriots) – I find it necessary to remind people one more time why the Patriot is morally safe when engaging the Blue “voter” or “Non-Combatant”.  The Blue voter is NOT merely exercising a “…legitimate difference of political opinion…”
The Blue voter is a Marxist working to overthrow the republic, to overthrow by force the US Constitution, advocating that Government take the fruits of your labor, the bread from the mouths of your children, by force.  Yes, by force, because if the Blue voter’s guy gets into office, as we have all seen, they’ll send men and women with badges and guns to enforce the Blue voter’s wish to overthrow the Constitution.
That is Treason.
Treason is the only crime articulated in the Constitution –
Article III Section III: Treason against the United States, shall consist only in levying War against them, or in adhering to their Enemies, giving them Aid and Comfort. No Person shall be convicted of Treason unless on the Testimony of two Witnesses to the same overt Act, or on Confession in open Court. The Congress shall have Power to declare the Punishment of Treason…
If using the muzzle of a firearm is not levying war, I sure as hell need remedial English.
The Blue voter is an active Traitor seeking the violent overthrow of the Constitution that most of us have taken an oath to support and defend against all enemies, foreign and domestic.That Treason is most assuredly a direct and violent infringement upon my Rightful Liberty, and I am morally, by Natural Right, entitled to defend my Rightful Liberty.There is no Miranda in War.
When you find yourself face-to-face with an Enemy of Liberty in a time of war, when there exists an existential threat to the republic, you do NOT need permission from your local Prosecutor to defend your country.  You want to live up to the “Testimony of two witnesses” aspect of the Article, get a buddy and go watch the same people.  You and he satisfy the threshold.
In summary: The Blue Voter and EVERY f’n person facilitating the overthrow of the Constitution and the legitimate republic of the United States, by force of violence, and that violence may morally be met with the ultimate violence, for the US Congress, per the Constitution, has deemed one of the penalties for Treason is Death.
Kerodin III
~~~~~NNNNN~~~~~
I heartily agree, thus I have stated, and continue to affirm that, “Those who abuse Liberty, sentence themselves to Death!”
In addition, those who hold faith know that sin is the cause of death, both of the body and of the soul – so abuse of Liberty is truly death, for it kills the soul, not just the body.
LT
~Those who abuse Liberty, sentence themselves to Death!