U.S. Treasury Is Down to One Day of Cash 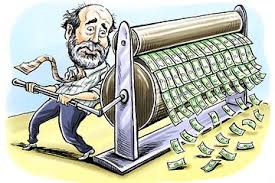 Economist John Williams says the Federal bank account at the US Treasury Department is down to just one-day’s estimated outlay, a dire situation that can only be papered over for a short time. Williams cites the May 28 Daily Treasury Statement showing the US Treasury has an operating cash balance of ~$16 billion which is roughly one day’s average cash outlay of about $17 billion.

Williams paints reality over the fantasies created by the federal government in his latest commentary (#527). At his website Williams shadows government-issued economic statistics, erasing the false illusions created to make it sound like the economy is in recovery mode.

Williams shows the annual rate of inflation (buying power of the dollar) is ~9.3% rather than 2.4%, unemployment is more like 22% rather than 8% and the Gross Domestic Product, the measure of the production of goods and services, is actually in decline.

By papering over the real numbers, government has bought some time, but it won’t last long according to Williams.

The amount those T-bonds are discounted is the amount the US dollar will be valued at in the world marketplace. At that point, the US faces a default on its obligations to pay back lenders.

What the Rising Yield on 30-Year U.S. Treasuries Is Telling Us