Until now, everyone has been focused on the ‘little lies.’ 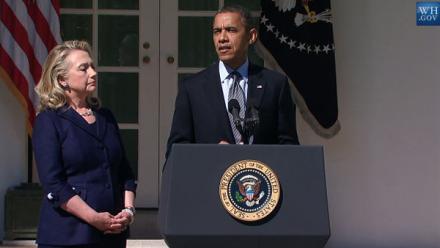 Obama, Clinton, their foreign policy advisors and the people involved in this agenda intend to start a war that will make Afghanistan and Iraq look like a small police action by comparison. They are going to start a war that will likely grow from a regional war to a global war, or WW III.  Afghanistan ‘imploded’ when attacked, as did Iraq. Syria will not, it will explode. Do the American people understand this?

Until now, everyone has been focused on the ‘little lies.’ The security, the misidentification of the CIA compound, the timeline, and on and on. They want us tofocus on the little lies so they can pull off the BIG LIE. The big lie being told is that the U.S. is merely providing minimal support, including humanitarian aid to the Syrians so they can defend themselves from Assad. That’s the big lie that covers up what they are really doing in the region.

The CIA compound in Benghazi was a logistics hub for weapons, but not only weapons from Libya. Weapons ordered by and destined for other countries, like Saudi Arabia, the UAE and other countries, knowing the plan, were allowing the weapons to be diverted, with Libya acting as the central shipping hub. When Assad falls and U.S. troops are called in for ground support, who will they be fighting? The Syrian army? No, they will be fighting the Iranian army, the Russian army and the Chinese army. Why? Because Iran, Russia and China all have a stake in the region. Putin called Syria his red line in the sand, and stated that WW III will start in Syria, not Iran.

Benghazi is a moving target of little lies that serve as cover for the big lie. Are Americans onboard?