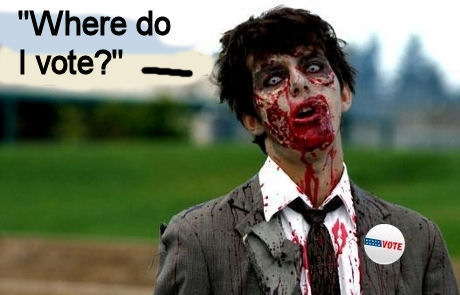 (Raleigh, NC)–Voter Integrity Project of North Carolina today at 1:30 officially challenged of 386 deceased Wake County citizens who they claim are still on the voter roll as part of the group’s statewide effort to remove deceased voters from county election rolls. Earlier this week, their volunteers challenged election officials to remove deceased citizens from their voter rolls in Alamance and Halifax Counties.

“People from all across the state are worried about stories of how dead people vote in Chicago,” said Jay DeLancy, the VIP-NC Executive Director, “so volunteers have joined us to encourage election officials to clean up our voter rolls and prevent that kind of corruption in North Carolina.”

Other citizen groups have relied on obituaries to highlight the delicacy of NC election laws, but VIP-NC matched the voter rolls against the same official death records the NC Department of Health and Human Services provides, monthly, to the State Board of Elections to arrive at their conclusions.

“North Carolina election law mandates a monthly process for election officials to remove the dead people from the rolls,” DeLancy said, “but one of the big loopholes in our fraud-friendly election laws is that nobody is held accountable if it doesn’t get done.”

NC General Statute 163-82.14 (b) requires the state election officials to “distribute every month to each county board of elections the names on that list of deceased persons who were residents of that county,” and each county is required to remove “any person the list shows to be dead.” Section 8 of the 1993 Help America Vote Act also requires this process on a regular basis.
John Pizzo, Research Director of VIP-NC, first got involved in politics during the 2010 Bill Randall for Congress Campaign with the job of preventing election fraud, but found the same type of problem in election offices throughout District 13, including Wake County.

“I found several hundred deceased voters on the rolls back then,” he said, “and the campaign quietly notified the election boards and gave them spreadsheets to make the process of removal as easy as possible.”

Pizzo’s research team was surprised to find 74 of the same deceased Wake County citizens he had submitted in 2010 were still on the voter rolls more than two years later.
“There may be some other explanation,” Pizzo said, “and I would be interested in hearing it, but I’m beginning to think somebody in that office just dropped the ball.”
DeLancy said that Wake’s voter rolls are not the exception to the pattern his group is finding all across the state, but declined to provide numbers or names of any other counties the VIP-NC is investigating.

“Our research suggests that this system is broken,” DeLancy said, “so over the next few weeks, we will give the citizens of North Carolina a look at how this simple task is being managed by election officials in their own counties.”

“The sad part about this entire volunteer effort is that none of it would have been necessary if Governor Perdue had not vetoed the photo-voter ID bill,” DeLancy said. “Unless she calls the Legislature back into emergency session, she will go down in North Carolina history as the last Governor who had a clear shot at preventing massive election fraud in North Carolina, but bowed down to political pressure instead.”

VIP-NC is a non-partisan, volunteer organization that works for “free and fair elections” by training volunteers to research the voter rolls in order to remove fictitious or other illegally registered voters and to monitor elections at precincts across the state in order to ensure that no voters are disenfranchised.