What Does the Debt Ceiling Represent to the Future of America? 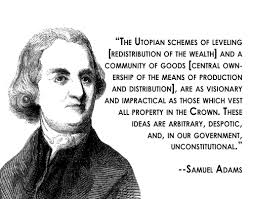 The media and both political parties have marginalized Americans who have had the audacity to question the path of our nation. Whether the label is Tea Party or 912, the proper term is patriot and that is what they fear. Patriots are awakening across the country, speaking out and standing up to restore the principles of our country. We the people were responsible for the Republican victory in the US House of Representatives in 2010. Our vote represented our demands for the return of fiscal responsibility and the Constitution.

This is the point that the Obama administration and Congress do not understand: the debt ceiling represents a referendum of all of the patriots’ efforts over the past two years. If the debt ceiling is raised, we will be forced to acknowledge that all of our work was in vain. Once we acknowledge that our efforts were checkmated, we will be forced to ask ourselves the same questions as our founding fathers asked. It will be easy to give up our fortunes: we know that the government will redistribute it for votes anyway. It will not be easy to give up our lives until we recognize that the alternative is slavery. This recognition will come once we see that debt ceiling raised but our reaction will be determined by our morality and dedication to natural law. This reaction will be tempered by our sacred honor but the message will be clearly sent to our government. If the debt ceiling is raised, the spirit of Samuel Adams will sweep our country:

If ever the Time should come, when vain & aspiring Men shall possess the highest Seats in Government, our Country will stand in Need of its experienced Patriots to prevent its Ruin.

Let us pray that our government recognizes what the debt ceiling crisis really represents to experienced patriots: We will sacrifice our lives, fortune and sacred honor to prevent its ruin. And that is a sacred promise from real Americans who understand what this country represents no matter what label we are given to marginalize us.

Wow! This is very insightful and so true! What a great summary of what a few have been fighting for others to understand. I am amazed at how wise our forefathers were. We need more wise men and women today to speak the truth but alas the people are closing their ears and being side-tracked by the politicians with their empty promises of hope and change.

Well stated. I choose to stand with Patriots! In Liberty, Bill

I guess it is show & tell time. I have served in our military to defend America & I will keep on defending it & I will keep spreading our message. It’s has come to the point that Washington will not listen to us so it is time that we take control of our government & give it back to the America people. If we don’t take control then all the founding members of America gave their all for nothing. We have to stand together to get the job done.

I understand the point you are making; however, I don’ believe that raising the debt ceiling will be the catalyst you think it will be. The American people, in general, are still not in enough pain to rise up. We’re a long, long way from that point, IMHO.
In the meantime, keep prepping.

If we accept the premise that the loss of material possessions is more important than the loss of our representative government in order for people to act, then we do not deserve the country that was given to us at such a high cost.

Whether we accept the premise or not, the fact is that for a large number of people, the loss of material possessions IS more important than the loss of our representative government. And those people certainly do NOT deserve the country that was given to them. As for me, I don’t have much left to lose, anyway!

I agree, Tina. I watched Fall of the Third Reich last night (just as a reminder of things to come) and it reminded me so much of us today. Human nature speaks to this. People will become enslaved with little fight. And they will stand by as their government (people -- your next door neighbors -- that is who the government is) destroys complete groups of people. Those who are prepping and do understand what is happening must remain strong. It is we who can save civilization after the fall. If we are not there with a plan to rebuild, the people will follow anyone who tells them they will save them. Stay strong, people. Stay strong.

People will follow anyone who tells them that they will save them.

That is the premise of “The Road to Serfdom”. This book also shows that the United States is experiencing the same conditions as Germany before Hitler rose to power with the same promise of saving them. Funny thing was that he never outlined a plan to save Germany: he only blamed the Jews for their suffering and took control.

If people understood this book’s premises, we would be able to recognize leaders from traitors and statesmen from future tyrants. I fear the upcoming “strong man” and hope for a John Galt. The United States has one important fact that the government is not overlooking that no other country in history has allowed: an armed populace. Their only recourse is gun control, food shortages and economic collapse to take over. Does anyone really doubt the future course of our country?

One other country has that policy and has never been overrun or collapsed -- Switzerland. Although politicians have tried for years to gain control of arms, the populace has been smart enough not to allow it, unlike the good old U.S. of A. BO just signed another EX. order taking more gun freedom away and it will take years to work its way to the Supreme Court and then, I doubt they will find it unconstitutional.
Steve, you are absolutely correct. The people will give in to anything so long as they get to keep their TV with cable.

I have seen “The Third Reich -- The Rise” several times. I would appear to me that the only difference between the Germany that Hitler took over and The USA is that our current leader (sic) has been working to impoverish us . Hitler came on the heels of the Weimar Republic. All of the other steps along the way are in the process of being accomplished. the only things that we stand between us and a dictatorship are a Congress of Statesmen, the courts (which are slowly being corrupted) and an armed populace (join the NRA).

What does this article even mean? Patriotism will save us? That’s ridiculous. You can be patriotic without being completely ignorant. What does raising the dept ceiling have to do with being a ‘patriot’? Let’s talk about the issues, not rhetoric. Why am I even posting on this, it won’t do any good? I’m just going to sit and watch the tea party destroy my future.
-Concerned Conservative who now looks like a progressive because I have a brain.

Here is one definition of “patriot”:

A person who vigorously supports their country and is prepared to defend it against enemies or detractors.

Who else will save our country but those who will defend it?

However, I suggest you read this article so that you can understand what you are feeling:

Editor’s note: I corrected the four misspelled words and one punctuation error in her comment.