You have been lied to by the Government, again – and here’s how you know 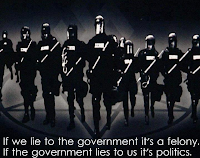 As an investigator I learned two things early on: How to lie well enough to get the information I wanted, and the other is never to believe what you’re told. As Ronaldus Magnus (Ronald Reagan) loved to repeat, “Trust, but verify”. It is an old Russian proverb that I’m afraid many people have never learned.

Fox News recently ran a story by the Associated Press, presenting the Government’s case in the ammunition purchase. But it was poorly written and the reporter did not ask the right questions, nor did they do all their homework.

This small segment highlights the poor research conducted by the AP reporter. Right off the top – The 176,000 rifle rounds were cancelled.

Put this in the “I don’t believe it” file, but something unusual has happened. The Department of Homeland Security /Immigration Customs Enforcement (DHS/ICE) has CANCELLED their request to purchase 176,000 rounds of .308 hollow point boat tail ammunition. According to an email that was passed onto me, Harry at the Federal Service Desk stated that a notice could be cancelled for a variety of reasons.