Your 2nd Amendment Cop Buddy Will Take Your Guns 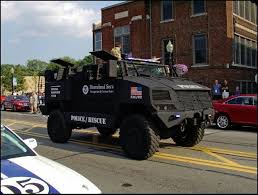 There is a lot of chatter amongst conservative “2nd Amendment cops” and military folks about how they will not obey the orders when the grand pronouncement is made to take guns. It will be a cop sit out. What will really happen is quite different. Your Republican cop or military buddy will gladly and patriotically take your guns.

Gun grabs and grabs of anything else – children, money, real estate, raw milk – don’t come down the chain of command as such. There is not an edict that comes out saying:

All federal, state, and local law enforcement officers and all active duty military personnel are hereby ordered and required to seize firearms from all persons whose only crime is non-compliance with the firearms transfer provisions contained in the Children’s and Puppies’ Omnibus Health and Safety Act of 2014. Operation Patriot Crush will commence at midnight on June 1, 2014. All will be required to participate from that date forward and to actively engage in door-to-door gun seizure operations against fellow Americans. Constitutional objections by officers will not be recognized and are hereby deemed meritless.

What really happens is that good ol’ patriotic cops are told by their bosses to show up at the police department at o dark thirty for a briefing about the execution of a search warrant. This happens hundreds of times every day. These law enforcement agencies often have military personnel and resources dedicated to assist in their mission as well. No one ever objects. There is action afoot against n’er do wells. It is based on a hush-hush deep dark sinister undercover deal. It can’t be discussed because cooperators are “in deep” and it’s all “need to know.”

Fortunately, your buddy gets to be in on the action the day that the door kicking is done. It will be cool. It’s like black ops. It’s like a video game. It’s like a military adventure against the ferreted-out scum of society. It’s exciting and he gets to be there. He can meet his cop pals at Pizza Hut later on for lunch and brag about how he punched a guy who “had an attitude” and made him throw up and said, “How’d you like that home boy? Get used to that. You are going to get a lot more of that in the joint, if you’re lucky!” Before the raid, he is already getting a few comic one liners ready to go with the catchy punch lines to be thrown in later describing something like how a perp soiled himself when your cop buddy demonstrated his manhood by pointing an M4 at his forehead. These guys are scum and he has to get his licks in and deal firmly with them before those pansies in the courts get ahold of them and dismiss everything on some technicality.