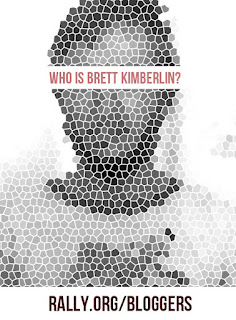 Aaron Walker, whose complaint against convicted terrorist Brett Kimberlin became a conservative cause célèbre this past week, was reportedly taken into custody today after a court hearing in Rockville, Maryland.

One person who attended the hearing in Montgomery County District Court said that Kimberlin asserted that Walker’s continued blogging represented a violation of a “peace order” Kimberlin had obtained against the Virginia attorney, who says Kimberlin tried to “frame” him for assault earlier this year.

During the course of the hearing — which reportedly lasted about an hour — Judge C.J. Vaughey appeared to become increasingly hostile toward Walker, who was taken into custody when the hearing concluded.

On Thursday, May 17, Walker published a 28,000-word account of his experience being targeted by Kimberlin, which soon caught the attention of leading figures in online New Media, including University of Tennessee law professor Glenn Reynolds, who writes the popular Instapundit blog, and bestselling author Michelle Malkin, who warned her readers, “Please remember: Kimberlin is a radical, violent, lying, dangerous felon.”

UPDATE: According to a source, Kimberlin claimed during the hearing that he has received death threats as a result of Walker’s violation of the peace order. In 1981, Kimberlin was sentenced to 50 years in federal prison for his crimes, including the 1978 terrorist bombing that brutally maimed Vietnam veteran Carl DeLong.

UPDATE II: A copy of the “final peace order” (time-stamped 10:52 a.m.) states that Kimberlin is “in fear of imminent serious bodily harm” as a result of a “countless number” of death threats, and that “there is clear and convincing evidence that [Walker] is likely to commit a prohibited act in the future against [Kimberlin].”

UPDATE III: To understand what is going on here, please see my column today at The American Spectator.

UPDATE IV: Just spoke to a source who confirms that witnesses saw Walker led out of the courtroom in handcuffs. Ali Akbar, president of the National Bloggers Club, Tweets:

The National Bloggers Club has created KimberlinFiles.org to help call attention to the case and to enable “supporters to make financial donations to a relief fund as a show of support.”