When Will America Break Her Chains of Slavery – Part 1? 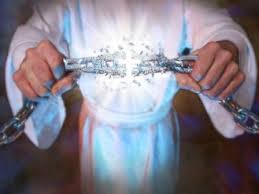 It is for freedom that Christ has set us free. Stand firm, then, and do not let yourselves be burdened again by a yoke of slavery.

Slavery takes many forms but I want to concentrate on the following definition:

Submission to a dominating influence

As with any controversial subject, the discussion revolves around the defining terms. In our case “submission” and “dominating influence” are the terms. Let’s discuss submission in terms of our founding fathers’ viewpoint. Everyone is familiar with “No Taxation without Representation”. In George Washington’s mind, this was the essence of why he fought. It was not about paying taxes: it was about slavery. If you have no representation in government but are taxed to support it, the government is taking a portion of the fruits of your labor and you are receiving nothing in return. This was simple: any portion of your time (labor) that is confiscated is time that you are enslaved. Any portion of your life that is enslaved means that you are bound in slavery: freedom is an absolute condition. Since Christ set us free, no man or government has the right to infringe upon it.

First, let me state that slavery in any form is evil and must be fought in our country and condemned in other countries. So how did a Christian nation initially justify slavery?  How did our forefathers justify slavery if Christ set us free? They argued that any person living in the colonies who was not born here and was not Christian in their original country was a heathen. This “qualification” meant that they could never become an English citizen and had no rights which became the justification for slavery.

At that time, race played no role in who was a slave. This is easily proven since the first court case justifying “indefinite indentured service” or slavery was Johnson v. Parker in Virginia. Mr. Johnson won the case and John Casor became the first slave in the colonies in 1655. Both Mr. Johnson and Mr. Casor were “Negros” originally from Africa.

The “Christians” at this time practiced religious freedom only in the sense that Protestant religions were acceptable. Anti-Catholic sentiment was the norm throughout the colonies. The point being twofold:

Today, Christians practice what the Bible teaches: anyone can accept Jesus Christ as their savior. No limitations are put on who can receive the gift salvation from God. Therefore, Christians can never justify or accept slavery. It also shows that our nation never intended religious freedom for all religions as our “government” forces us to accept through laws. Our founders would never have accepted a representative sworn into office using the Koran.

So what can justify slavery today? To a Christian, nothing can justify slavery: freedom is a natural law granted to us by God. So only those who attack natural law (God) are supporting slavery. The federal government uses the labels “domestic terrorist” and “sovereign citizen” to vilify those who believe in natural law. Why? To keep us enslaved through excessive taxation, laws and regulations. To marginalize our Christian faith by transferring it to submission to their dominating influence.

There is no doubt that a tax rate of over 50% on half of the people is slavery. So who are our masters? The other 50% who receive the fruits of our labor. An example recently given to me proves this point. The average family receiving government aid in California is $37,160 – compared to pre-taxed wages. The average savings account interest rate as of August 16, 2013 is 0.21%. This average family in Californian is receiving the equivalent interest paid on a bank account of $17,695,238.10.  In North Carolina, this would be equivalent to $12,266,666.67.

When will America break its chains of slavery? When we acknowledge that our God given right to freedom is a natural right that our “government” has denied us. When we acknowledge that the political process is broken and will not be fixed at the ballot box. When we stop submitting to a dominating influence: the federal government. Sometimes it takes someone looking from the outside to tell us the truth:

The day that de Tocqueville warned us is here. There is only one way to regain our freedom and that path starts with recognizing that freedom comes from God:

That truth is simple but the path will be hard.

This entry was posted in Editorial, Education, Religion, War and tagged Freedom, Slavery. Bookmark the permalink.

4 Responses to When Will America Break Her Chains of Slavery – Part 1?