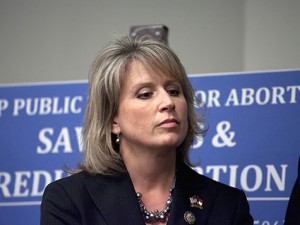 Republican Rep. Renee Ellmers (NC) seems to be digging herself in deeper with the pro-life base of the GOP. On Friday, Ellmers—who led a group of House Republicans in January in a maneuver that torpedoed a late-term abortion ban on the eve of the March for Life—took to her blog to defend herself as she also referred to pro-life groups as “abhorrent” and “childish.”

Former nurse Ellmers denounced pro-life groups one week after her decision to NOT support the House Pain-Capable Unborn Child Protection Act.  The NC Rep attempted to defend her actions on her blog by stating  “As a mother, a wife, and a devout Catholic, protecting life is a mission that is very near and dear to my heart.”

This is not the first time that she has sacrificed lives of children;  she previously voted against the DeSantis amendment which prioritizes deportation of illegal aliens who abuse children.  The amendment passed with broad Democrat support and one “no” Republican vote – Ellmers.

DeSantis was said to be “perplexed” as to why anyone would vote against the amendment and stated, “Why would we have any tolerance for child molesters”?

this lying filthy dirty karl rove rhino should croak to death, i surely hope they primary her out for good in 2016, this creep needs to be booted out. what is wrong with the people of her district are they brain dead. and they surely dont need the little creep sodomite akins taking her place, the little lefty democratic.