Compare and Contrast the TEA Party and Occupy Wall Street 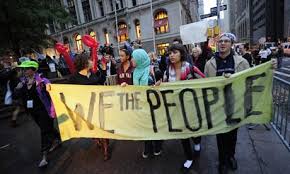 I attended the Occupy Raleigh event today (October 15, 2011) in order to film the four hours of speakers and singers. Here are some observations of other Raleigh TEA Party events vs. Occupy Raleigh.

1. TEA Party events start with a prayer. Occupiers do not mention the Lord or church. God was mentioned one time at the Occupy Raleigh event.

6. Governor Perdue tried to stop the TEA Party at the Capitol last year. The Occupiers had a four hour permit which they tried to get extended (video coming) from the Governor’s office by Bill Faison (D) – Chapel Hill, NC.

7. TEA Party attendees want to stop wasteful government spending. Occupiers want the government to forgive their mortgage and college debt by having the rich pay their “fair share” in taxes.

8. The breakdown in attendance by race was about the same for both types of events (there were a few more Hispanic Occupiers). However, TEA Party events are racist and Occupier events are not racist.

10. Both types of events were non-violent but revolution and rebellion are not mentioned at TEA Party events. This was the first event that I attended where security cameras were in place to monitor the crowd.

13. TEA Party attendees do not get arrested. Occupiers want to get arrested to further their goals.

14. TEA Party attendees know that the United States is a Constitutional Republic. Occupiers think they live in a Democracy.